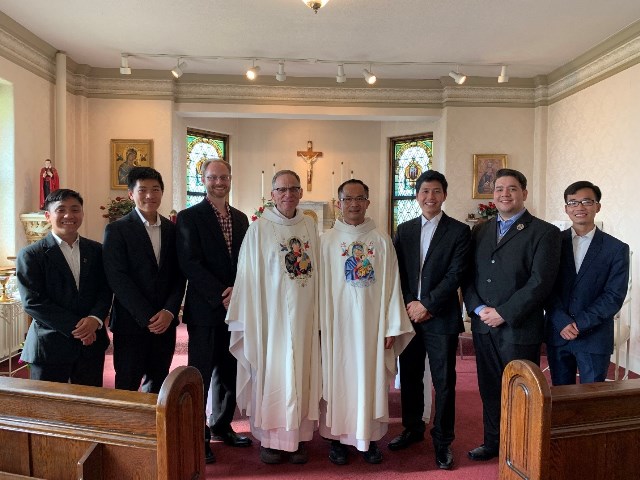 Although July 24, 2019 marked the official start of the 2019-2020 North American Redemptorist novitiate, the launch was the result of several months of sometimes-hectic preparations to get the Lima house in order, in particular the third floor where the six novices would be living.  Major renovations were done in several bathrooms, new floors were installed in a some of the bedrooms, and furnishings purchased for bedrooms and common spaces.  The kitchen was also renovated with new appliances installed (stove, fridge, freezer, and dishwasher).  Kudos to Fr. Jack Kingsbury CSsR (Conference Coordinator for North America), Kevin Devine (Baltimore facilities manager), Fathers Mike Sergi CSsR, Jim Szabonya CSsR, and Mike Houston CSsR, the parish staff, and numerous parish volunteers for all their help in getting the house ship-shape.  In addition, the two Directors of Novices (Ed Eherer CSsR and Chuong Cao CSsR) spent the better part of a week picking up supplies, stocking the house pantry, and procuring hardware, houseware, software and any other kind of ware you could imagine.  I’m convinced that Fr. Chuong is now on a first-name basis with the staff at the local Sam’s Club.

On July 22, the novices finally arrived – two young men from the Denver Province (Jose Montoya from Houston, and Steven Urban from Salina, Kansas) and four from the Extra-patriam Vice-province (Dai Ho and Vinh Nguyen from Houston, and Joseph Nguyen and Bao Tran from Portland, Oregon).  After taking a day or so to settle in, we were ready to start on July 24.  We gathered in the house chapel to celebrate the Eucharist and officially inaugurate the new novitiate year.  Fr. Jack Kingsbury presided and offered the novices some words of wisdom on this most auspicious day.  We were also joined by Fr. Joseph, the formation director of the Extra-patriam Vice-province who had accompanied his novices to Lima.

The first few days involved typical orientation stuff – getting acquainted, filling out forms, looking at schedules, household nuts and bolts, and so on.  We also had the chance to check out a couple of attractions in the area:  the Neil Armstrong Air and Space Museum (in his hometown of Wapokaneta - first picture below) and the Ohio Caverns (near Zanesville - second picture below).

Once the dust has settled, we will be having our opening retreat in nearby Sylvania under Fr. Jack Kingsbury’s direction.  Then it’s “getting down to brass tacks,” as the saying goes.  I must say that in the short time we have been together, I’ve encountered a great spirit of openness and generosity.  These will be important ingredients in making for a successful year.  Add to that a good measure of prayer.