Warning: Use of undefined constant full - assumed 'full' (this will throw an Error in a future version of PHP) in /www/redemptoristvocations_637/public/wp-content/plugins/oxygen/component-framework/components/classes/code-block.class.php(111) : eval()'d code on line 4 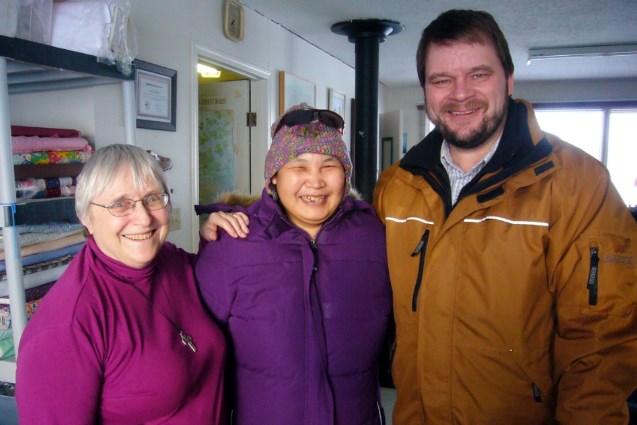 Surprise! Surprise!  God is a Surprise! ...  part of a song written by Carey Landry, this was certainly the theme of my Easter.  What an adventure!!  Further to my previous article on my Easter in Inuvik, this article continues the adventure I had during my time in the North.

There was to be no Mass for Palm Sunday in Tuktoyaktuk, and it is prohibitive to heat the church all week.  We therefore, celebrated Mass and a pot-luck supper in the home of Sr. Fay Trombley SCIC.  Redemptorists who worked in Edmonton, will know Sr. Fay who taught spirituality and Church history at Newman Theological College from 1983 through 2005.  She is part of a Congregation of Sisters called the Sisters of Charity of the Immaculate Conception, (www.sistersofcharityic.com/) who were originally based in Saint John, New Brunswick.  Redemptorists worked for many years on common pastoral projects with the Sisters in Saint John.  I was surprised to meet Sr. Fay as I had not seen her since the 1990’s!  ... even more surprised to see her joyfully “retired” here!  You can read her story here:  http://globalsistersreport.org/ministry/ministry-top-world-14526 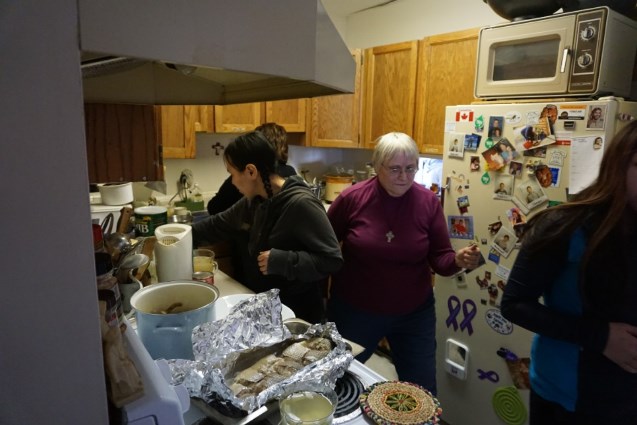 In these pictures we see Sr. Fay and others preparing supper in the kitchen and Sr. Fay, with Mardy, and Fr. Jon.

He came with five other accountants from Edmonton to conduct an audit for a construction company in Tuk.

And yes, still more surprises… Many Redemptorists know well, Fr. Don Stein, a diocesan priest from the Archdiocese of Edmonton.  For the last seven years he has been travelling north to serve the people of Tuktoyaktuk by presiding at the Easter Triduum celebrations. 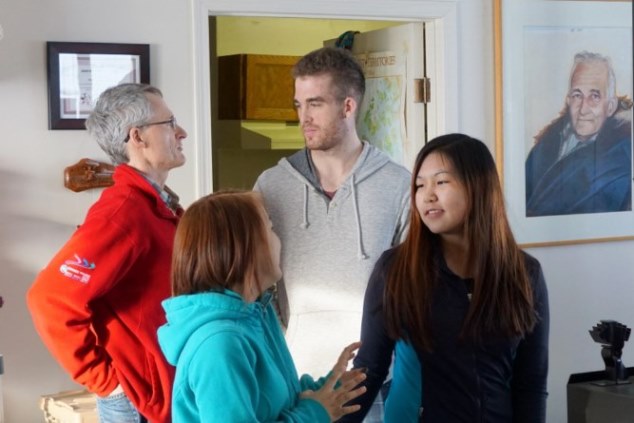 “Surprised, surprised…” to meet my nephew James, (at the back in the middle of the picture below) who lives in Edmonton.

I arrived on Tuesday of Holy Week, into a community of about 300 people, called Paulatuk.  Grateful for a smooth landing on a cold, snow-packed runway, I was immediately impressed by the warmth of the people.  I had heard about a local hockey tournament that was wrapping up at the local indoor arena and went over to see for myself.  Young children were out playing on the ice until the young men took to the ice for the final game of the tournament.  That evening was the start of six days of Easter activities.  I was surprised to find out how big an event Easter is in this community. 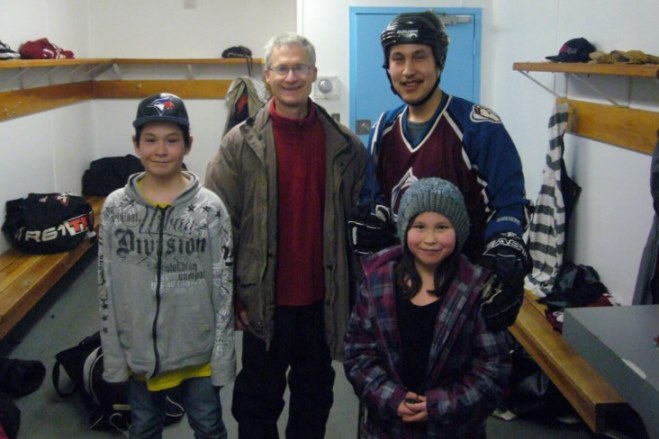 More than surprised, I was edified!  “Are you the priest?” was the first question after I said hello.  Then the young children through to the young adults, all told me about the priest who had lived and served the people in this area for over fifty years.  Yes, even the young people who had never met this priest in person, could tell me his story and how he had learned the Inuvialuit language and culture, so they could relate to him like a member of their own people.  Immediately I was taken over to see his picture that is mounted on a plaque, in the arena that bears his name. 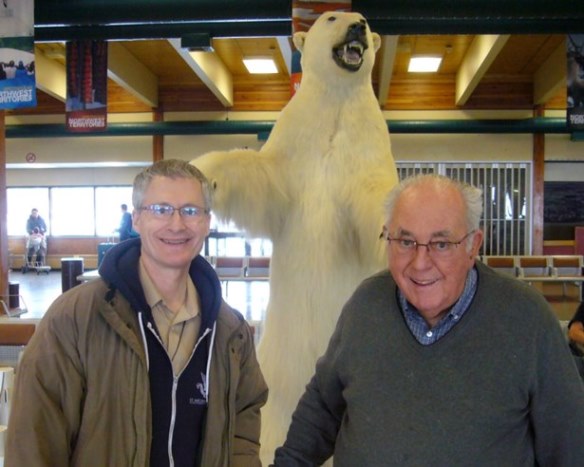 Here, Fr. Don Stein and I are pictured in the Inuvik airport where a local resident of the north, greets people with a big … is that a smile or … what!?

Throughout my stay, I could feel the encouragement of Fr. Leonce Dehurtevant O.M.I.  You can read his obituary on the Northern News Service website at http://www.nnsl.com/frames/newspapers/2002-04/apr22_02obit.html.  I also kept hearing the pleading of Fr. John Molnar C.Ss.R..  At many Redemptorist assemblies in Western Canada,  thoughout the 80’s and 90’s, he lobbied for us to go and serve the people in northern Canada. 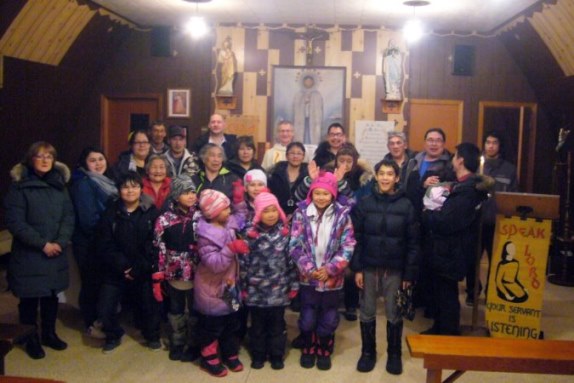 The picture shown here is of the people who attended the Easter Vigil at Our Lady of Lourdes.

As you can see, the church walls are covered in wood panelling that was popular in Canadian homes in the 1960’s.  The panelling is carefully installed in artistic patterns.  The furnishings are simple, with benches for seating.  Statues and pictures of Mary and Joseph and Jesus adorn the sanctuary, and hanging along the side walls of the church, are pictures of the Stations of the Cross.  Behind the people, in the centre you can see that an artist painted a picture of Mary dressed in a more traditional Inuvialuktun parka.

I was surprised to see the Easter Vigil was so well attended as it began at 11:00 pm!  Good Friday, as is common in parishes further south, attracted so many people that the church was full.  I am very grateful for two Catholic teachers Marie (far left), and Rob (underneath St. Joseph), who helped with readings and were willing to have their feet washed on Holy Thursday!  Thanks to Agnes (in front of Rob) and some of the women elders, who led us in some Inuvialuktun songs at the Easter Vigil and on Easter Sunday at the noon Mass.  Ray, the man in the blue shirt near the right side of the Easter Vigil picture, is the mayor of Paulatuk and I was grateful for his support at all our celebrations.  Thanks to Andy who provides van transportation for the elders who cannot walk very well anymore and for any priest who needs to get to the airport.  Another young man whose name I have lost brought some of the elders in his family to church on a snowmobile!

Interestingly, this year marks 20 years that the community has been without a resident priest.  I am so impressed that these people are deeply committed to the celebration of their Catholic faith.  Upon my arrival in Paulatuk, I was given a two page hand-out that included a full schedule of all the Easter Triduum and Easter Sunday celebrations at the church.  This was circulated to people in the hamlet, posted at the local hotel and the grocery store, and also surprisingly read aloud on the radio station each afternoon.  Yes, indeed, I was surprised to find out that every afternoon for a few hours there are young adults who host a local C.B.C. broadcast of announcements, stories of interest, and favourite music of the people in Paulatuk.  During one broadcast I was interviewed and given a chance not only to talk about myself but to personally invite people to our celebrations at the church.

I am so impressed that these people are deeply committed to the celebration of their Catholic faith.

At the same time however, people in Paulatuk have not been able to celebrate the Easter Triduum with a priest on a regular basis for the past 20 years.  Marlene, who is a current pastoral leader for Our Lady of Lourdes parish, remarked that she feels competent to handle the Christmas celebrations.   She, however, senses a great void and sadness that they are losing the memory of how to celebrate Easter since there is no priest who regularly celebrates the Easter Triduum with them.  So I ask if you know of someone with a desire to be a missionary priest, encourage them to consider becoming a son of St Alphonsus Liguori in the Congregation of the Most Holy Redeemer.

So I ask if you know of someone with a desire to be a missionary priest, encourage them to consider becoming a son of St Alphonsus Liguori in the Congregation of the Most Holy Redeemer.

Wow!  Easter Sunday arrived surprisingly, with a lot of warmth at minus 5.  We celebrated Mass and renewed our baptismal vows with a church half full of people.   During the previous week I had been invited by people that I met around town, to come and bless their homes and some of the young couples had asked if they could have their children baptised.  So I headed out after Mass on Sunday to bless homes and on the way…surprise, surprise!...snowmobiles waiting to be blessed!  I ran into some young men who were preparing their machines for the Sunday afternoon snowmobile race, and they too asked for a blessing.

And Easter Monday was quite a blessing!  A great big thanks to Marlene who spent all afternoon preparing two sets of parents and godparents for the celebration of baptism. 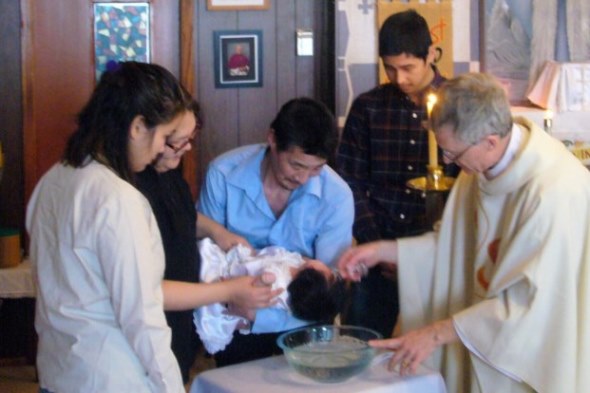 After the baptisms of Aria and Charlotte, it was time for the closing celebrations of Easter in Paulatuk.  Many people headed over to the school gymnasium for a supper and dance.

After we ate a bountiful banquet, the tables disappeared, as people were then seated around the outside of the gym.  In the picture you see the drummers warming up.  Sometimes the men will sit and drum while the women come out in front to dance, and then they reverse roles.  You can see that the children are encouraged to stand next to the adults and to copy their actions and participate in learning their drum dancing.  This is a real resurrection for Paulatuk.  For many years the drums lay mostly silent among those in the community.  The middle drummer, Nolan Green is a very talented musician.  He took it upon himself to learn from elders and from others, the skills of drumming.  As you can see, he has been very effective in nurturing a group of drummers and dancers that is growing.  They have also taken their drum dancing on tours through Canada and the United States.  Later, the square dancing started up with western music in the background.   Nolan with his fiddle, along with a few musicians on various instruments, lead that music. 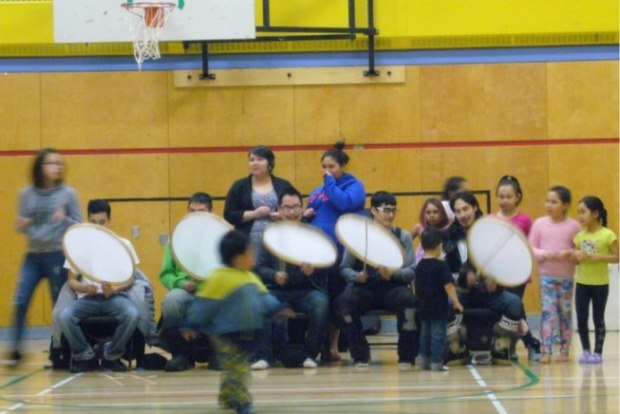 Of course, recently in the news, we have heard about many difficulties and deaths in isolated communities in Canada.  I was surprised and profoundly inspired by the people of Paulatuk who are courageously finding ways to bring light and hope into situations that can seem very dark.  I was caught off guard by such a powerful experience of Easter resurrection working great works!  Silly me, for being surprised!  Isn’t that what Jesus promised? … when he said,  (John  14.12)  “Amen, amen, I say to you, whoever believes in me will do the works that I do, and will do greater ones than these, because I am going to the Father.”